Eggplant fatteh is one of the best Arabic recipes, and it is a Syrian dish of Syrian origin, and a very nutritious and useful meal, as eating it has many health benefits on the body, and the method of preparing it does not take long.

It can be served as a meal for dinner, or as a side dish alongside the main dish, and the eggplant fatteh is characterized by its delicious taste, ease of preparation, and low financial cost, in addition to containing many nutrients beneficial to the body.

It is prepared mainly on yoghurt, toasted or fried Arabic bread, and it is often served at breakfast and is usually served hot after decorating it with nuts, and it is possible to serve it next to a plate of white rice.

Fatteh varies in Arab cuisine, the most famous of which is the fattah with meat, which is famous in the Iraqi and Egyptian cuisines, along with the famous chickpea fatteh in the Syrian and Lebanese cuisines, in addition to the chicken fattah, the Makdous fatteh, the Kibbeh fatteh, and the Shawarma fatteh as well.

Avoid eating eggplant if you are allergic to the chemical solanine in eggplant, to avoid a possible allergic reaction such as rash, facial swelling and itching.
Be sure to eat an appropriate amount of eggplant fatteh, and avoid excessive content of calories, fats and carbohydrates, to avoid weight gain and obesity.

Eat the eggplant fatteh and be sure to eat the recipes rich in eggplant, to get the antioxidants and polyphenols, to enhance the work of the body’s cells to process and manage sugar.

Make sure to eat eggplant, as it is a rich source of potassium and dietary fiber that contributes to maintaining a healthy heart and blood vessels.

Eat eggplant, as it is nutritious and rich in important nutrients that contribute to maintaining the healthy growth and development of the fetus.
Avoid excessive eating of eggplant, and consult a doctor before eating it, because it contains plant hormones that are likely to stimulate the menstrual cycle and thus stimulate labor.
Make sure to avoid eating uncooked foods, and avoid eating raw eggplant, to avoid digestive problems and allergies. 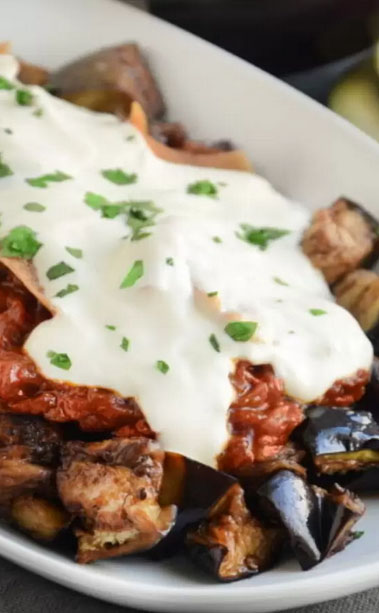